Not too long ago, the Calvery Brewery in Oxford, CT had to shut it's doors.  With so many different breweries popping up in CT, it's certainly not easy to get a foothold in today's craft beer community.

Thankfully, Jason and Tom Sobocinski (owners of New Haven's The Ordinary and the Caseus Fromagerie & Bistro) were throwing around the idea to start their own brewery so they started checking out this new space that just became available.  While the Bros enjoyed the occasion homebrew from time to time, they wanted someone with brewery experience and begun searching for a brewmaster that could help make their dream a reality.

Meanwhile, while Tom and Jason continued looking, a gentlemen by the name of Tyler Jones was in the process of moving his family to CT after him and his wife had a baby.  In addition to his formal training, Tyler also had experience at both Mercury Brewing (MA) and most recently, the well-known Portsmouth Brewery in New Hampshire.  Tyler begun his own search, trying to find a place to brew some of his already established recipes and create some new ones.  So... let's review:


Jason and Tom needed a brewer.

And in the words of A-Team's Hannibal Smith... "I love it when a plan comes together."

Since they opened their doors around Labor Day wkd, Black Hog has been putting out a deliciously consistent product - putting their own take on beer styles (i.e. Granola Brown Ale, Ginga Ninja, Easy Rye Da Rye IPA, Coffee Milk Stout among others.).   I had the pleasure of attending a Meet and Greet with Tyler Jones just last week at J. Timothy's in Plainville, CT as they released their latest offering, Bacchanalian Barleywine. 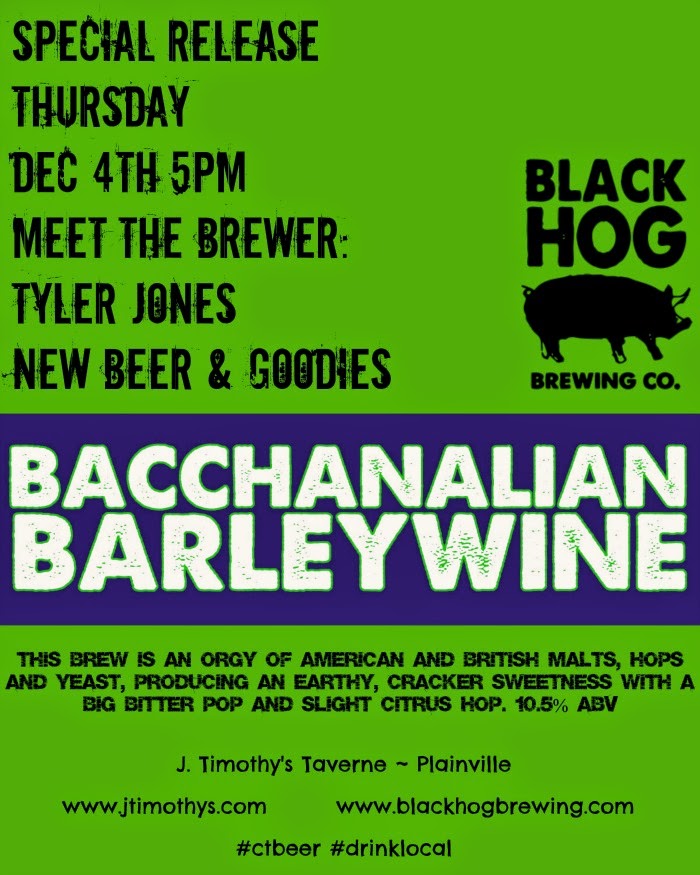 I couldn't think of a better way to kick off the #Beer411 #12BeersOfXmas countdown.  Let's do this.

Since I was reviewing this in a dimly lit bar, I couldn't get a good read on the color.  Carbonation was on the lower side as most barleywines are.  Ok, time to put your big boy pants on.  This beer checks in at a hefty 10.5%.  Due to the popularity of the release, I had a pretty far walk across the vast parking lot at J Tim's.  It's December.  It's Cold.  But, after a few sips of this barleywine, I was warming up nicely.

This style can be a little overly sweet, but thankfully Tyler incorporated just enough bready sweetness.  It played very well against the bitterness and orange citrus notes.

The alcohol heat is very evident on the mouthfeel and finish.  Tyler mentioned that over time, this will become much more subtle.

With a beer of this strength, and perhaps I'm slightly influenced by the Sobocinski Bros, but I would pair this with some strong cheeses (blue or Gorgonzola).  Perhaps a mac n' cheese with some of the stronger ones mixed in.

I'm not sure how limited this offering will be in the weeks/months to come, but if you see it on draft at the brewery, trust me - it's worth the trip.  I mentioned earlier in this post that it's quite difficult to separate yourself from the amount of beer offerings in CT, but I have no doubts that Black Hog Brewing will be a mainstay in the years to come. I've said it before, and I'll say it again, #CTBeer is in great hands.

Check out their tasting room varieties and hours among other cool brewery things at:
http://www.blackhogbrewing.com/