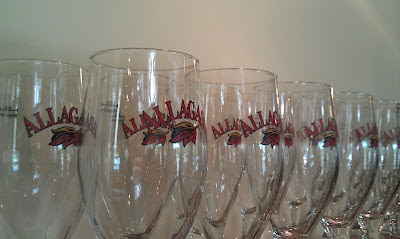 So much time to drink... so little time to blog. I recently was scolded the other day about my blog. Yes, I admit... I'm not as consistent with my posts as I wish I was. Hopefully, it's about the QUALITY, not the QUANTITY. I HAVE been much more consistent with my tweets though... I mean, that's what a blog is in a sense. To enlighten people that read your blog about things that they might not have known about. When you tweet something, you're pointing your followers in a direction that they might not have if you didn't. My friends over @RelicBrewing and @RandomPink coined the term, "Nano-Blog" this last wkd. It works, right? Alright... let get to it.

I've had some fantastic... umm.... BREW-tastic adventures the past few weeks, all over New England. The next few posts might be a bit out-dated and a little out of order... But I saw a tweet the other day the sparked an idea to get this post up.

It was a link to this article titled, "Top Ten Craft Beer Cities to Visit". I quickly clicked through the obvious choices here: Fort Collins, CO... Portland, OR... San Diego, CA... and then I saw it: Portland, Maine. About two weeks ago, two of my sisters and I decided to head out and tour Portland, Maine for the day. One of my sisters lives IN Maine, and Portland is only about 25 minutes away from her. Since it's so close to her I've been meaning to check it out for some time now. Given the rest of our wkd's activities, we could only devote one full day to our BREWtastic Voyage, but it was well worth it. And I'm already looking forward to the next trip. 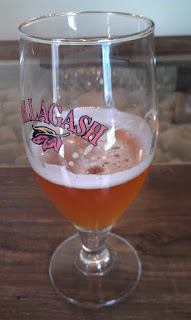 We were focused. Our first stop was one of my favorite breweries, the Allagash Brewing Company. Our tour was scheduled for 12:30 so my OTHER sister departed CT around 8:30am without a minute to spare. We picked up our Maine sister got to the brewery JUST in time for the tour... and as if I couldn't LOVE Allagash any more, they STARTED with the tasting. They led off with their flagship, Allagash White... then the Victor (brewed with cabernet franc grapes), followed by the Tripel and lastly... (drumroll)... the Curieux. If you don't know the Curieux, you are MISSING out. It's a beautiful sweeter beer aged in Jim Beam barrels. They explained that in order for bourbon to be considered bourbon, it can only sit in the barrel once. Allagash has an agreement with Jim Beam that when the bourbon is done aging, the barrels get shipped up to Portland. Allagash uses these barrels only once and there you have it... Curieux. And after one sip... you can taste all 11% of this tasty treat. 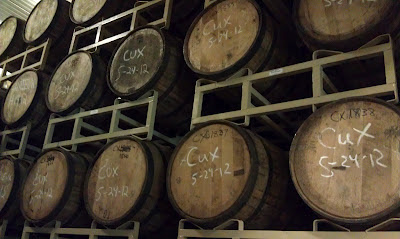 Along the tour, our awesome tour guide, Ashley, took us into the CURIEUX ROOM (also known as Heaven). There are barrels from floor to ceiling and as you walk in, you're instantly hit with the sweet smell of bourbon. 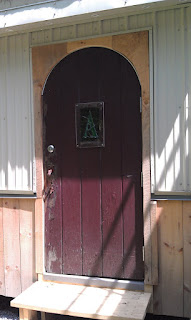 One of the "cool"er parts of the tour actually happened AFTER the tour itself where we got to check out the Coolship. It resembles a small one room shed with an flat shallow pan that takes up most of the room. Hot wort is added to this pan and allowed to cool overnight (rather than forced to cool using wort chillers). Along with the opened air cooling, the natural occurring yeast from the air gets into the wort. This is what ferments the beer. The interesting thing about this whole process is that it's the first known one outside of Belgium. There you go... Allagash, yet again, pushing themselves to achieve great things.

That was the START of our adventure. We then checked out the much, much smaller, newer Maine Beer Company. That was a quick visit but still cool to walk in, meet some very cool people and try some tasty beers. I even bought their "Thank You, Allen" that's only available at the brewery. 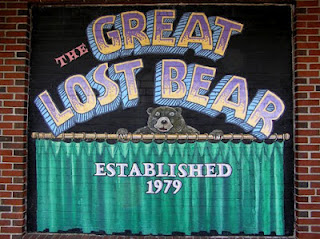 After about two hours of sampling and empty stomachs... we needed a base. So we headed over to The Great Lost Bear. A measely 60+ beers on tap. SAY WHAT?! Shut yo mouth. We had some delicious teriyaki mushrooms with a pepper dipping sauce, and some cajun style wings. And with over 60 beers to choose from, we had to jump into a sampler: 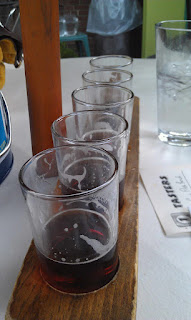 Never had any of these beers in my life... all very good. Loved the Allagash... my favorite might have been the Six Point. Green Flash was good, but very complex.

As the black clouds started forming, we quickly found shelter at another staple in the Portland Beer Diet... Novare Rae Bier Cafe.

This wonderful place touts 25 rotating drafts, 2 hand pumps, and over 500 bottles. And look... we were there on the day of a Green Flash Takeover. Ok... Let's go.

I kicked things off with the notorious IPA known as the Palate Wrecker, which has over 100 IBUs (International Bittering Units). The bartender warned me that this would kick the @#$* out of my tongue, and I loved it! And with Green Flash making a name for themselves in CT now, this is one to look for, especially for you hopheads out there. This is also a great place to get a little nosh. We had a nice cheese/meat plate and some duck tacos. They also have a mug club / dungeon looking place. Basically you get a "scorecard" and have one year to try all of the beers on the card. If you fill it out, you're awarded a mug that's kept in this dungeon looking type place. Complete with lock and chain and heavy iron door. Very, very cool. And since we were in the area (once the rain had stopped)... we walked over to one of Maine's Original Brew Pubs, Gritty McDuff's. After wrecking our palates, and trying all sorts of crazy brews, it was nice to get a balanced Vacationland Summer Ale and an IPA.

I have to admit... after Gritty's we were beer'd out. But what a day it was. So if you are looking for a place that's only a few hours from CT where you won't break the bank... head up to Portland, Maine. There are SO many other places to check out including Geary's, Shipyard or restaurants like Nosh or 3 Dollar Dewey's. You could EASILY spend a wkd up there. Just make sure you stretch out your liver first.

As the Welcome to Maine sign reads, "The Way Life Should Be." Cheers... and safe travels.

So on the heels of my Maine excursion... word JUST came out yesterday that one of my favorite brew pubs is having... wait for it... an ALLAGASH BASH!! It's one thing to find a great Allagash beer on draft... it's COMPLETELY other thing to take over 10! Mark your calendar, kiddos...

Allagash continues to establish themselves as one of the BEST in the craft beer industry. And to have them come all the way to CT for this is nothing short of incredible. Just two weeks ago, I drove over 3 hours to try some of these beers... and come next Thursday, 10 of them will be in little ol' Torrington. Check out this lineup:

Food pairings, giveaways, and MORE. A craft beer lovers dream and a night not to be missed.