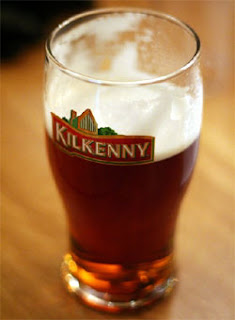 As the Irish half of Beer411, I thought it was appropriate to weigh in on one of my favorite Irish pints, and remind everyone that while green beer is festive, it still tastes like Budweiser, because it is. It just has green food coloring in it - gross.

Instead, tap into the wealth of the Irish drinking season with a REAL brew from the country; Guinness, Smithwick’s, Murphy’s, Kilkenny or Beamish.

My favorite of late would have to be the Kilkenny Irish Cream Ale. It’s tough to find, but a good Irish pub usually has it on tap. For Instance the Burren in Somerville, where every other person in the bar has a Gaelic accent, is known to pour this from time to time, especially around St. Paddy’s.

This beer has an amazing history and is older than some countries, with a heritage dating back to the fourteenth century. Until recently, a pub in Washington, D.C. was the only place in the US that carried it, thankfully that’s changed.

The beer pours amber red with a creamy white head that dissipates quickly. The nose isn’t powerful, but you definitely pick up a toasty aroma with caramel malts, and some earthy tones.

The taste is refreshing and light. It feels very creamy on the tongue, but it’s not heavy. It’s sweet with caramel flavors, roasted barley and notes of tea and honey. It has that great malty-red after taste that I love.

This beer makes for easy drinking and it reminds me of the cross between a red ale and a stout, two of my favorite beers. The bartender described it as Smithwick's with less hops and creamy like a Guinness.

Happy St. Paddy’s to all my Irish and wannabe Irish kin out there. Be safe and remember cab drivers are your friends.