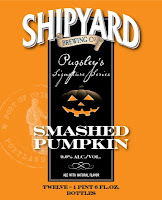 
The review of the season is HERE!!! As I write this entry, I bring you all good and bad news. The good being that I feel like Shipyard has a GREAT idea on their hands. They've successfully create a "heavy" Pumpkin Ale (compared to the Pumpkinhead Ale and Post Road's of the world). The bad news is that not only was it an EXTREMELY limited release, it has more or less disappeared from the shelves as Packies are now beginning to turn a blind eye to Fall/Autumn/Oktoberfest beers. Hard to believe that the season has already come and practically gone. So take in this review, and be on the lookout for this one next year!!!

I'd like to dedicate this review to the Girosky brothers, because without them - this would not have been possible (Kudos to my buddy Ian as well for finding a bottle at his favorite packy in Naugatuck). The first bottle that I had the pleasure of tasting was bought RIGHT AT the Shipyard Brewery in Portland, ME (thank you Chris!!). Then, it was hand delivered to me by his brother, my good friend Matt - WHICH was then dropped off RIGHT AT MY DOOR!!! These guys rock. And after I acquired said delicious beer, it turns out that Southington Wine and Spirits was NOT going to get any cases in! No fault on them... they tried and were even TOLD that they would get at least a case. But, nada. Ok... enough back story... let's DRINK!!

As I put earlier, Shipyard basically took their Pumpkinhead Ale concept, and kicked it in the ass. This beer gives you almost 4% ABV more (sitting at a tasteful 9%). Of course, there are STRONGER Pumpkin Ales out there (i.e. Weyerbacher's Imperial Pumpkin) but you know right away that this has a bit more bite to it. Poured into a glass the color had a copper almost amber tinge to it. The head on the beer was white and thin. While there isn't much of a smell to this beer once you pour it into your chalice (probably because it's from the bottle), this variety has much more spice to it (attributing to its "heavier" flavor). You get a mouthful of pumpkin spices, with hints of nutmeg, vanilla, and cinnamon. The hoppiness of this brew is a bit more than other pumpkin ales, but still remains subtle. The malts give it a nice medium body with a touch of bitters at the finish.

Please keep in mind that all of these flavors and tastings are grading a beer out of the bottle... I mean, according to Beer Advocate, there is almost an entire letter grade different from the folks that reviewed this beer on bottle from those that tasted it on tap! Maybe next year I'll take a trip up to Maine and find out for myself!

Overall, I would definitely buy this beer if I see it again. And I do have to say to my co-author, if PumKing is your current favorite, this beer may give the "King" a run for its money!!


I know that this blog was intended for seasonal beers. But this label got my attention and it seemed fitting seeing that Halloween is right around the corner. So for those that have daring pallets... step into my office.

Over the past few weeks, I've gotten to know the Beer Manager at Southington Wine and Spirits. He knows a ton about micro brews and I try and learn something new every time I stop in. Last week, I noticed a whole new line of beers that I hadn't seen before from the Stone Brewery out in California. And I trust the managers selection... he recommended that I give the Arrogant Bastard a try.

I have to admit... it was the name that drew me in first. Then as I examined the logo of the devil, I noticed their tag line: "You're Not Worthy." Then I read the back of the label and was instantly sold. The description on the back label is absolutely that of an "arrogant bastard". Check it out for yourself:

"Arrogant Bastard Ale: This is an aggressive beer. You Probably won't like it. It is quite doubtful that you have the taste or sophistication to be able to appreciate an ale of this quality and depth. We would suggest that you stick to safer and more familiar territory --- maybe something with a multi-million dollar ad campaign aimed at convincing you it's made in a little brewery, or one that implies that their tasteless fizzy yellow beer will give you more sex appeal. Perhaps you think multi-million dollar ad campaigns make a beer taste better. Perhaps you're mouthing your words as you read this."

And of course.. you have to recognize the last line on the bottle:

"Questions or comments? If you don't like this beer, keep it to yourself --- we don't want to hear from any sniveling yellow-beer-drinkin' wimps, 'cause this beer wasn't made for you."

Ok, enough about what the bottle looks like... let's move onto the color & taste. It pours a nice dark amber color with a light brown head. The taste is incredibly complex hitting you instantly with hop/maltiness and finishing with a bitters. I feel like the bitter taste resembles that of a grapefruit. And at 7.2% ABV, it hits you harder than most beers... but with a name like Arrogant Bastard, I kind of expected it. It's not a "hop bomb" as some call it, but somewhere in the middle of a Double IPA and a Barley Wine.

Now what happened next was a little bazaar. I found that while the beer warmed up slightly... the tastes started really evening themselves out. At first what came across as a very strong bitter ale, was now much more mellow; drinkable and enjoyable. I highly suggest that when trying this beer, you maybe want to let it "breathe" before jumping right in. When I had it, we poured it right out of the fridge and jumped right in. Not the way to go. Instead, open this beer and let it sit on the counter while you enjoy something first. Then, jump into the world of the Arrogant Bastard.

If you are looking for a little extra credit, I also had the pleasure of sampling the Arrogant Bastard Oaked variety. A little more expensive than it's Arrogant cousin, but the oak'y taste really comes through on the end. Pointed out by my friend Ian, it had a nice maple finish to it.

My apologies for straying from out seasonal mentality. But this was something that I absolutely wanted to share with the Beer411 public. Be on the lookout for the next review thanks to the Girosky brothers - 2 hand delivered bottles from Maine. SHIPYARD's SMASHED PUMPKIN!!! 1st RELEASE!!