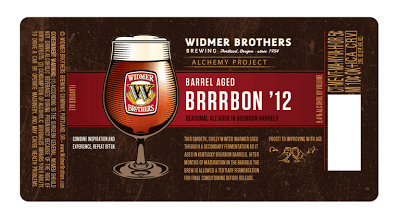 Lucky Number 7. I walked into the package store several days ago completely expecting to follow in the steps of my fellow blogger. Meaning, most of my posts revolve around high gravity beers, so I thought it was time to dial it back a bit. On Friday, Katie's post was a wheat beer... a delicious 6.4% offering. A little higher in abv than most people are used to, but nevertheless, fairly "average" level when compared to the 8% & 9% beers that we write about on occasion. Needless to say, I failed.

I remember seeing the Widmer Bros Brrrbon on the shelf last year, but I already had my beers picked out, so I never got around to it. But my new friend Mike, the beer manager from Locascio Liquors in Prospect, CT, was so adamant that this was a fantastic choice, he offered up the 2011 version that he had personally kept in his store cooler since last year. Anyone with that kind of drive to age a beer, appreciates the contents. How could I say "NO"? I decided on the 2012 version, since I really had no basis of comparison. Later that night, I ended up at a GREAT brew pub called the Ginger Man in Norwalk... Would you believe it... there it was, the Widmer Bros Brrrbon on draft. Knowing that a post was in my near future, I ordered one. Our server then tells us that, it was SO popular, they unfortunately ran out. Ok. #1, Mike from Locascio was a huge fan... then #2 I go one of the most popular brew pubs in CT and they've run out? Now I KNOW I've made a good choice.

On the pour, I get a nice dark orange color, almost burnt. Cloudy. It had about two fingers of off white head with sticky lacing along the sides of the glass.

The beer is called "Brrrbon" so I can imagine what I'm going to get on the nose. Hmmm... not as much bourbon as I thought, but I do get some. There's roastiness along with subtle vanilla, caramel... and some oakiness from the barrel aging as well.

Yum... this is a tasty, tasty beer. Clearly the bourbon is present here. I'm getting a pleasant dark brown sugar sweetness that balances with the maltiness.

You would think that with the caramel and sweetness up front, those flavors would linger more. But this beer is surprisingly dry on the finish. There's a slight hop bitterness that's there too.

Much like my other reviews, this beer may not be for everyone. It's got bourbon characteristics, it's 9.4% and has some hop bitterness on the finish. If you're looking for something simpler, I would suggest the Brrrbon Winter Warmer that they also have this season. It's dialed back slightly at 7.2%, and is a little more session-able. However, between the two Widmer offerings, I would choose the one I'm reviewing here.

Fear not, Beer411 family... it's win-win here. The Widmer Bros will not steer you wrong.

Sounds like you got your hands on a nice sippin' brew. I'll be on the look out in Mass. to see if I can find it.

You? Yes... But, I think your brother should pass on this one.