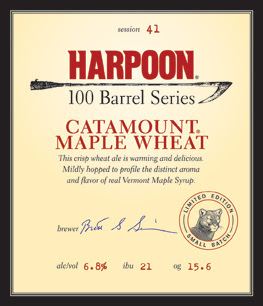 My colleague recently visited the Harpoon brewery and was thoughtful enough to bring me back a fresh growler of Harpoon’s 100 Barrel Series, Catamount Maple Wheat for me.

I did a little research to learn that this is Harpoon’s second attempt at this beer and it’s made with genuine Vermont maple syrup. Got to love local products using local products. The website reads:

“The balance of malts and hops allows the distinct flavor and aroma of real Vermont maple syrup to take the lead. The maple sweetness and body blankets this velvety amber beer showcasing one of New England’s most beloved traditions.”

The pour: A nice fluffy white head and the color of the beer, as to be expected it was an amber red, maple color

The nose: Not much going on. I am getting a little bit of sweet, bread notes, but it’s not overly sugary, or woody like I may have thought

The taste: A very bubbly brew with burnt caramel flavors and a strong bitter malt flavor. The finish is somewhat medicinal. It’s interesting because it doesn’t have that light crisp wheat flavor that I expected. It's more of a lager. Also, I hate to say it – but where’s the maple? Had it not been in the name I wouldn’t have been looking for it. I was expecting a sweet, grassy, wheat beer but got something much different instead.

It’s drinkable, but had I not had a growler and just ordered a pint at the pub, I would have grabbed the beer list and changed it up.

I always appreciate new recipes that bring together New England, but this was just ok for me. Grade: B

Im glad I read your review, I almost, ALMOST got this beer this weekend. Now Im in no hurry. I went with the 11.11.11 vertical epic!

Good save Jake! Nothing against Harpoon... I actually thought this was ok on draft. But it pales in comparison to the Vertical Epic 11.11.11... In the words of the Knight from Indiana Jones, "You have chosen... WISELY."

Let me know how you like it if you end up giving it a shot - Cheers!

I bought it, I had to! and i linked you in my latest "haul post" regarding the beer haha, hope you dont mind.

I finally opened it tonight. You were generous with a B. what a boring beer. a good wheat overall, but not at all what was to be expected

It's a decent draft... but doesn't really translate to the bottle too well.